I think the most important quality of an improviser is the ability to play interesting rhythms. Today we are going to develop this ability by tackling a difficult rhythm, playing seven notes over two beats. The classic name for this formation is 8th note septuplets.
The original exercise is a three note scale sequence played 4 notes per beat (16th notes). Accent the notes at the start of the formation. When playing in 4 accent every fourth beat, in 7 every seventh. This will prove quite difficult, so I advise you to play along the gpx file until you hear the melodies unfolding.
Have fun with this one.

Link to gpx: http://sebastiangrosu.com/desk/7over2.gpx
Posted by Unknown at 12:33 PM No comments:

Here you have two very useful arpeggio exercises.
The first one is a fluency exercise designed to get arpeggios and scales under your fingers.
The second one introduces the concept of heptatonics, playing all the notes of the major scale but in a structured way. It is sometimes called triad pairs, or arpeggio pairs, because one arpeggio in the scale is played followed by the next triad in the scale (in our case Abm7 with Bbm). This kind of exercise introduces subtlety in your playing.
I strongly encourage you to try all positions and tonalities. 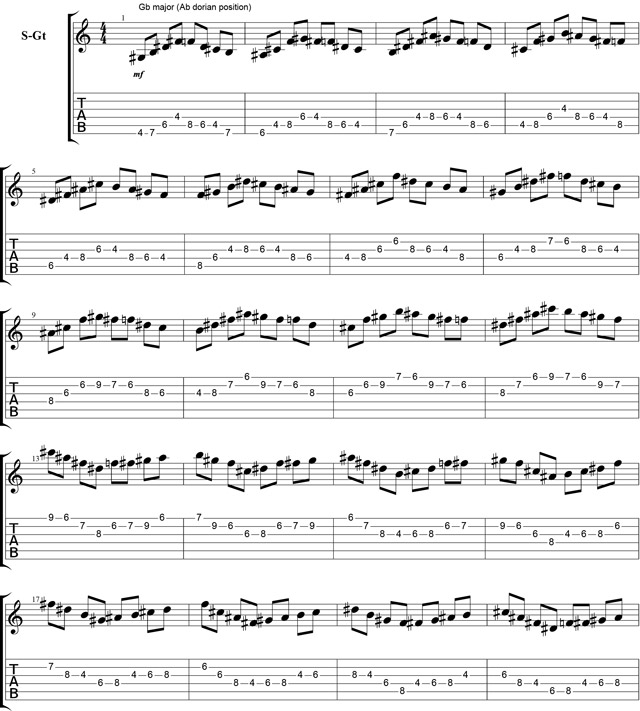 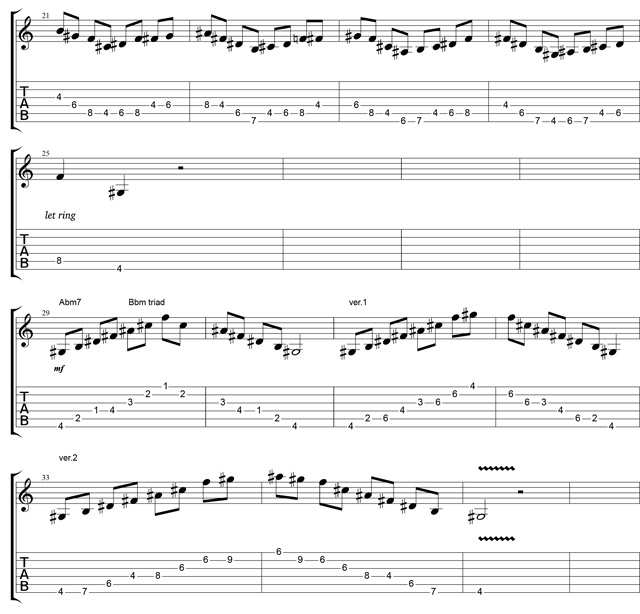 Posted by Unknown at 3:33 PM No comments:

This week I am introducing you to arpeggios.
Arpeggios are just the notes of the chord played in a row. If we extend our triad with another third we get four note chords, very popular in jazz.
So the harmonization of the major scale changes as follows: 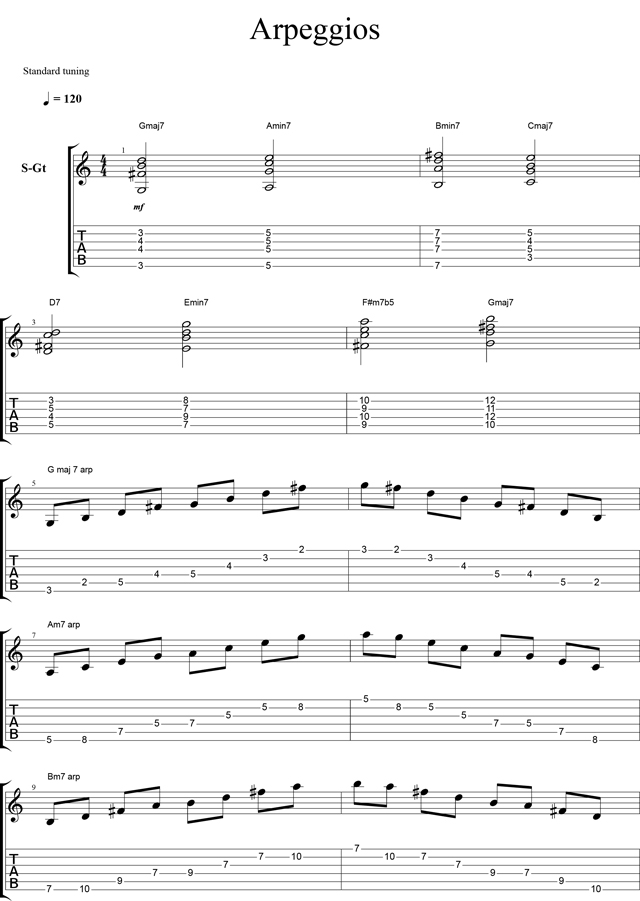 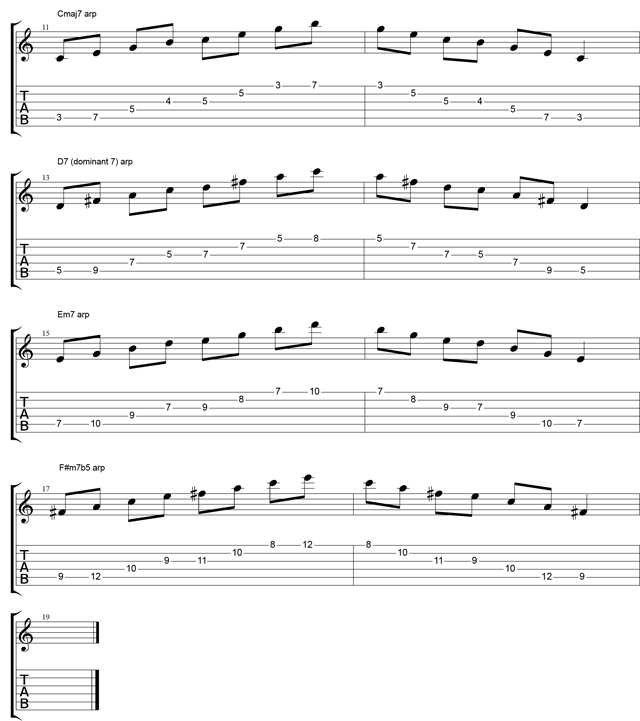 Posted by Unknown at 6:04 PM No comments:

By playing every other note in the scale we obtain 7 triads - three major, three minor and one diminished. Playing the notes in a triad simultaneously we get chords. This is called the harmonization of the major scale - we have obtained a family of chords that derive from a certain scale and thus work together. 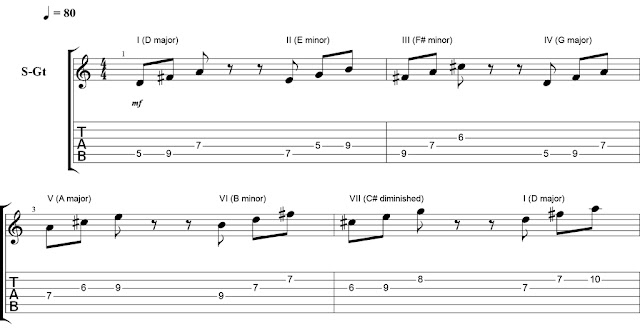 This is the chord formula for every major scale: I major, II minor, III minor, IV major, V major, VI minor and VII diminished. In the context of four note chords we will be altering a little bit this chord formula.

Superimposing the major triad over the corresponding major chord will produce the most consonant sound possible. By playing triads from the same family - for example, instead of D major over the D major chord we could play F# min or B min - we can still achieve a consonant sound without being too obvious. The three triad families are (I, III, VI) - (II, IV) and (V, VII).

I encourage you to play with these triads and use any of them over any chord. What sounds consonant to me might not sound to you. Nevertheless, being able to hear them and being familiar with them will help you take informed decisions while improvising.
Posted by Unknown at 1:28 PM No comments:

This week's subject is intervals. By repeating an interval and combining intervals you can obtain a structured melodic sound.
Practice carefully the following exercises in all positions and all scales. 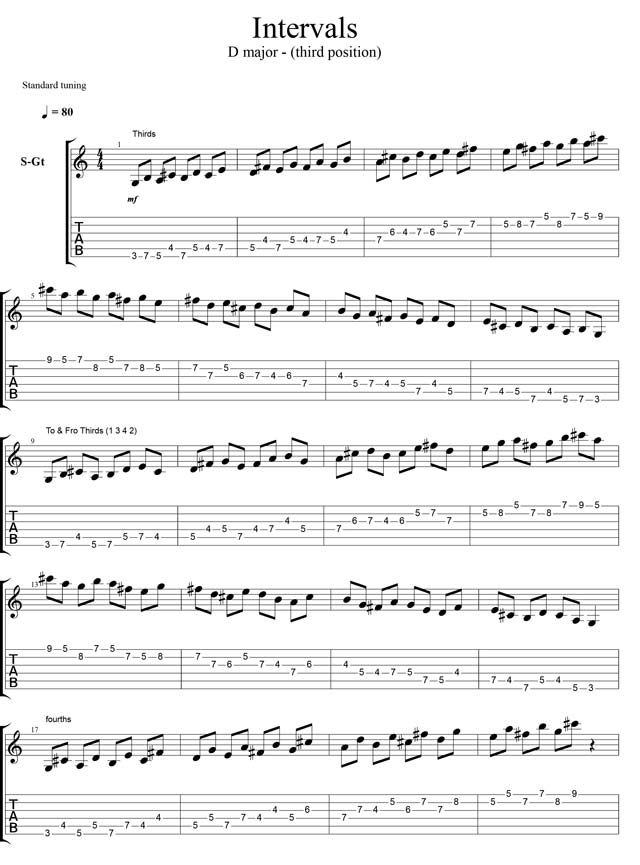 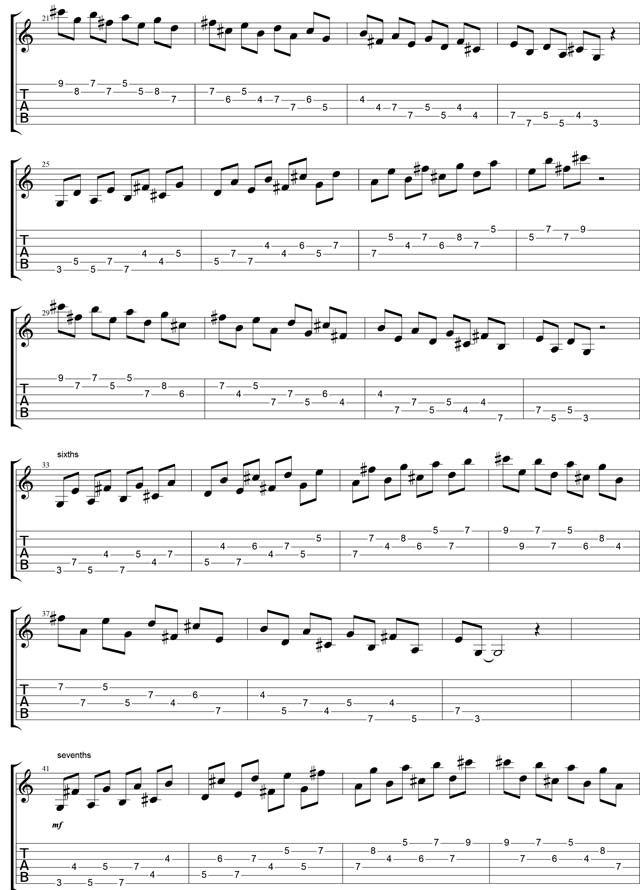 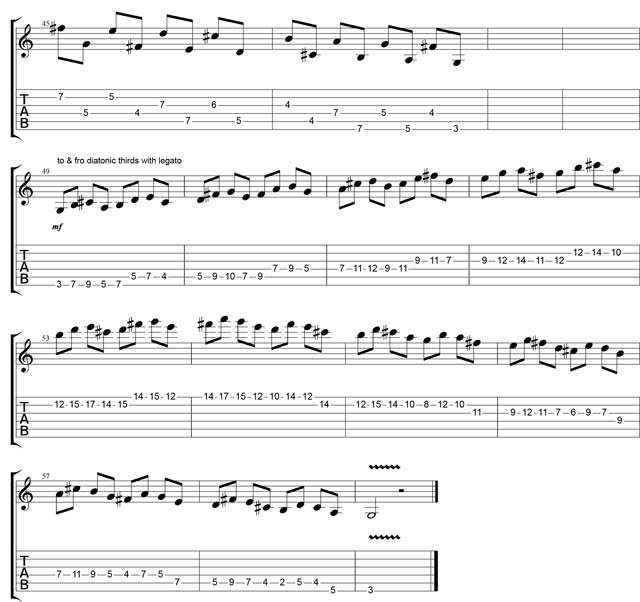 Posted by Unknown at 6:28 PM No comments:

Here is the scale in all positions on the fretboard: 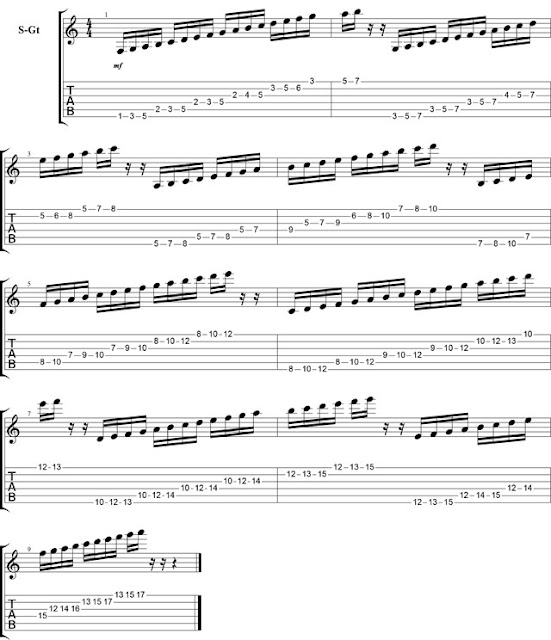 Posted by Unknown at 2:58 PM No comments:


Warm up is such an important to get your hands and mind ready for practice or performance. Here is a simple exercise I came up with to shorten my warm up time but reap the benefits of warm up: strengthening fingers, stretching fingers, becoming comfortable all over the fretboard. 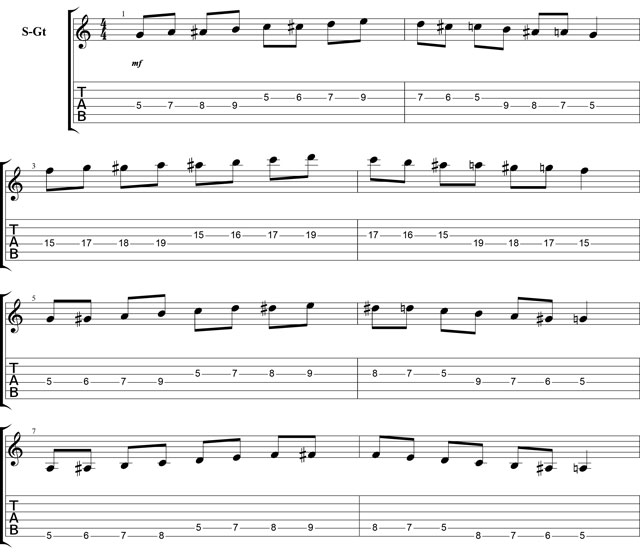 Posted by Unknown at 6:26 PM No comments:

I'm a musician and teacher based in Bucharest, Romania.
You cand find more about me by visiting my webpage: www.sebastiangrosu.com